Indian jewellery has a history as old as the nation’s history! Jewellery derives from the Latin word “Jocale”, which means to play. Ornaments and the desire to adorn oneself were popular between 5,000 and 7,000 years ago, during the periods of the legendary Epics – Ramayana and Mahabharata. Beaded jewelry was first discovered in the Indus Valley Civilization around 1500 BC.

The Indus Valley region realized later that pebbles or shells do not even have a long shelf life and that metals may be utilized to produce ornaments. India seemed to have a vast quantity of precious metals and jewels, and it thrived as a result of sales and trade with other countries.

The very first nation to mine gems was India. During the middle ages, the Mughals ruled India. They offered their jewellery-making skills and expertise to the blooming creative Indians.

Your hair is a representation of who you are. Long, short, curly, and straight hair are all options. Who doesn’t enjoy accessorizing her hair with a few adornments? If you put your tresses in a plait, you wear a Veni, which is a jewelled braid. Veni brooches, which are traditionally used on very important occasions and may also be used as a hairband, are accessible.

Veni is most popularly adorned by Maharashtrian brides or women readying for special functions, though its variations are witnessed to be worn by women around the nation. Today, contemporary brooches made of gold and diamond have largely replaced Veni but the latter still remains the essence the same. 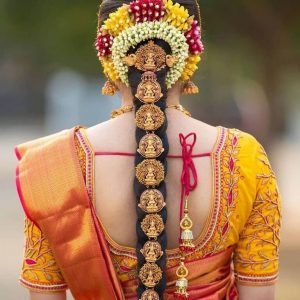 Earrings, not only enhance your ear’s glamour but attracts your entire face. Earring with traditionally hefty and elaborate craftsmanship provides a new depth to one’s charm. Chandbalis are named after the most magnificent heavenly star in the sky, the moon. Earrings in the form of a moon give your outfit a mysterious vibe. Jhumkas are as old as our history; the Jhoomar – chandelier-like style is cultural and nicely complements the neck.

A single pair of earrings and some bangles have the power to make us look extravagant and fashionable on our own. A pair of earrings can accentuate the everyday look and add a special charm to the simplest of outfits with ease. Pairs of traditional Indian earrings are the most versatile item that can get one ready in a flash for virtually any event.

Choosing the proper jewellery may help people look more delicate in their makeup and clothing, as well as dazzle in the details. It takes a lot of expertise to figure out how to create this jewellery better so that we may bring more glory to ourselves. And, with that stated, it’s amazing how these little glittering diamonds can drastically transform one’s entire appearance.

Maang tikkas are also jewellery dating back several years. They are available in a number of shapes and versatile designs; select one depending on your forehead form and desired aesthetic. In case you have a broad forehead, a thicker tikka might look fantastic.

If your forehead is smaller than average, a thinner Maang Tikka would look nice. Maang tikkas are usually made to coordinate with the rest of your jewellery.

For any bridal, a Maang Tikka decorating the bride’s forehead is a must-have. Maang tikkas, which are worn at the hair-splitting, exude an otherworldly grace that takes you to another age. The Maang Tikka is enhanced by the Matha Patti, which has embellished chains on both sides.

Traditional hand jewellery has been worn in the country since time immemorial. Bangle jewellery, especially more so than any other piece of jewellery, has a distinct sparkle. Bracelets are an essential piece of Eastern jewellery, and no ensemble is complete without them.

Bangle Designs are used by women all across the Indian subcontinent to adorn their wrists and hands in various ways. Their impending power has stretched to Bangladesh, Nepal, and Pakistan, which are all neighbours.

According to excavations at Mohenjo-Daro, bracelets were made of copper, seashell, and pottery. Bangles were traditionally embellished with thick black designs and worn by both men and women. Sporting wristbands were supposed to aid enhance blood flow at one point.

Metal parts discovered at Mahurjhari, embellished bracelets from the Maurya Empire, and golden bangle bits from Taxila’s heritage site are some of the oldest examples of bands from previous eras. Polished shell bangles have been discovered in several Mauryan sites. There are also copper screws and, in certain cases, gemstone insertion.

Indispensable as we know it, the necklace is another traditional Indian jewellery that is used extensively.

Through antiquity, India has played a key role in the creation of many types of traditional jewellery styles, and one of the earliest forms of these fashion accessories is the Indian necklace accessory.

In truth, one of the earliest necklaces, originating from the 17th century, is said to have been carved and manufactured in the Indian subcontinent, with the Maharaja of Indore as the first known owner, who then moved to the West and passed it on to various kings.

Necklaces themselves are a special accessory that can uplift the overall look of a person and have remained the constant favourite of women for several years.

South Indian necklaces have especially stood out over the years. For instance, the Laxmi Haar is a gold long necklace encrusted with jewels, with the centre having engravings of Goddess Laxmi surrounded by peacocks, elephants and some other animal forms.

There is also the Temple-style necklace that originated in the Southern part of the country but has spread all over India now.

This jewellery consists of long or short necklaces depicting temple motifs and detailed with its beautiful Nakshi work without any repetition in the designs. It includes heavy use of pearls, diamonds, Polki, and other precious stones.

Further, Bengalis in the East have a few special necklaces of their own. Whether it be the Chik jewellery that is worn above the collarbone or a little below the neck. It is popular as a Bengali Jewellery design since time immemorial and is famous for its intricate styles, or the Paati Haar where the detailing of this necklace lies in the carvings of intricate designs and motifs by few talented craftsmen and is usually worn in the Bengali affluent families as ethnic wear 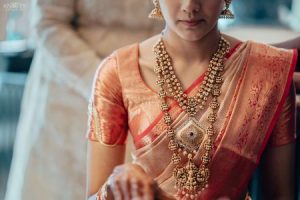 Popularly known as Payals, this Indian jewellery is worn around the ankles and is called anklets worldwide. Made of precious metals like diamond and gold, these Payals are called Paizeb, Sankla, Zanjiri, Golusu and Kaappu in different parts of the nation.

Earlier, young women everywhere wore these Payals though now it has become more of a style statement. Payals of several styles are available today. Contact our experts at Mahabir Danwar to know more about the diversities and avail of some exceptional Indian feet accessories.

Moving over to toe rings, these too are jewel pieces that have been worn in the country for a long time. It is most commonly worn on the second finger of the feet, predominantly bough in diamond form.

Worn around the waist, Kamarbandhs accentuate the waist of women. The variations of a Kamarbandh are quite a trademark. Available in thin and think form, in several designs of studded adornments, they encompass your waist and enhance your look. The perfect OTT option to be worn with sarees, lehengas and Anarkalis.

Symbolic of wealth and power in the earlier times, the Kamarband is also believed to have been worn by Lord Krishna. Wearing a Belly Chain with Anarkali or lehenga inculcates added grace and impact to the look. They are also made of gold or silver today and when worn, can only demonstrate royalty.

These are the several types of traditional Indian jewellery that are prevalent in the country for the past few centuries. New additions to them have been included in the form of Hathphool designs, choker necklaces and nose studs.

These traditional designs have set the base on which Indian jewellery has grown and thrived. As one knows, the older a jewel is, the higher it means in value, not only economically but also antique designs hold great sentimental value.

Often these are passed along through generations, for instance, a lineage of brides gets the same bracelet that changes hands with time.

To know more about traditional Indian pieces of jewellery, you can Book a Free Video Consultation or Contact Us at Mahabir Danwar.

A Guide to Understanding if the Diamond is Real or Fake