The diversity of Indian culture is unparalleled in every context. Irrespective of the North or South, each territory has its own jewellery culture, much like the famous traditional Punjabi jewellery. The Punjabis are unique in their adornment of jewels and arrangement of accessories, which is not only attractive but dates back to several years. Punjabi brides have imbibed modern styles with their age-old historical fashion to commemorate it into the perfect mix of class and elegance.

There is several signature traditional Punjabi jewellery that is worn in this region as well as has spread its influence along the rest of the Indian country. Here are some trending Sikh accessories:

The first and foremost mention of Punjabi jewellery is unmatched with the chura. Brides in Punjab are recognized for their use of the chura for several days after their wedding. This chura is a set of 21 bangles, usually made in red or maroon or even white ivory hues. These bangles are gifted by the bride’s uncles as pre-bridal custom wear and mark the status of a new bride. Guests gather around to witness the auspicious Chura ceremony, indicative of the importance of this jewellery for Punjabis.

The Chura is available in several designs, whether it be inscribing the name of the bride and groom on the bangles, Kundan textured, Pink bangles, or the Red-colored Chura. 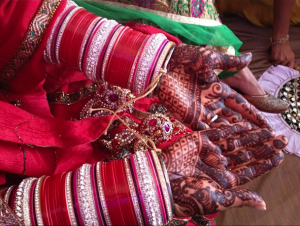 The Kalire is an umbrella-shaped Punjabi jewellery design. They are symbolic of happiness and forever love for the newlywed couple. The couple will never run out of food and always have shelter, which is what the umbrella shape of the Kalira suggests. The sisters and friends of the bride are responsible for tying this Kalira to the Chura worn by the bride.

It is shaken above the heads of unmarried girls of the house and is believed that whoever the Kalire falls on, will be the girl who is the next in line to get married. After this ceremony, this jewelry is dropped off at the temple with the priest who will shower it with his blessings.

There are several Kalira designs. You may opt for the Diamond Kalira which is more trendy, the Pearl Kalire, inspired by western cultures, the Tassel design, the Kundan precious Kalire, or the Gold traditional jewelry. 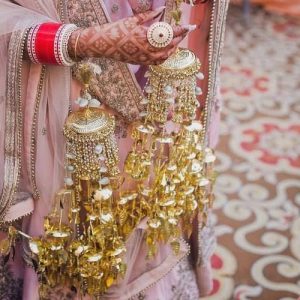 Not necessarily made out of flowers, the Haath Phool is an expert choice to make your hands appear elegant and sleek. The Haath Phool is often made of Diamonds or Gold and is attached by a string with the kada or chura of the women. It is not essential bridal wear but tends to be worn to up the style quotient of the bridal wear. 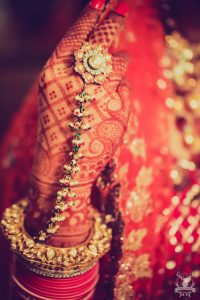 The bride gets a ring during her engagement, sealing her union with her to-be husband. This ring is worn to the wedding too. This Angoothi may have a history or emotional attachment behind it. For instance, it may be passed along a lineage of women before reaching the bride. These are elaborate with versatility in designs, meant to decorate the fingers of women. They are singularly crafted according to the taste of each bride. 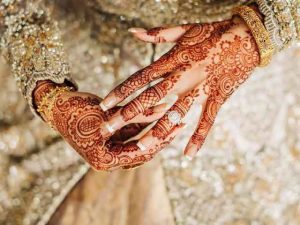 Wearing a Maang Tikka is a norm in almost all regions of the country. Women wear it at the mid-section of their hair or with the changing times, they are witnessed to use it as a side decor for the head. The Punjabi jewellery tikka tends to be an oversized accessory, placed centrally on the bride’s head. These are available in Gold-finished Kundan styles, Pearl or Emeralds hanged or even Polki based.

While the Maang Tikka is a single pendant, the Matha Patti appears to be more elaborate and has two chains attached to the pendant. It looks more heavy and filling when worn. However, both these choices look good and confusion might arise when selecting the ideal design. We, at Mahabir Danwar, have experts to help you make the right choice that not only complements your attire but also leaves a lasting impact. 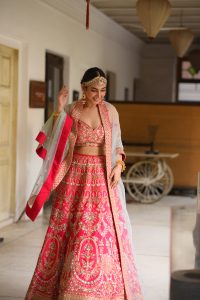 Among the many traditional Punjabi Jewellery designs, nose jewellery is one that is rich and exquisite when worn. The Shikpuri Nath is a minimalistic nose ring with a pendant at its center. A string of gold or metal is attached to the nose ring that goes behind the ears or into the hair. It’s usually made of gold or Kundan.

On the other hand, the Laung are smaller counterparts of the Shikapuri Nath. Its name is inspired by the Sikh term for clove. A bejewelled stud made of gold or diamond looks gracious when worn and enhances the value of the most casual wear.

When worn with a striking bridal ensemble, its effect is more so strong. 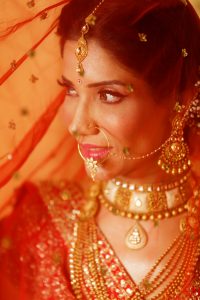 A very old concept, the Choker necklace has faded away from fashion a few years back. However, it has reappeared and rightly so, because of its magnificent persona. Worn just below the neck, enveloping it graciously and bringing focus to your neck, the Choker necklace is worn by women attending ceremonial functions or even brides. Depending on the design, it can appear rich or subtle as per the style. The Choker Set can be made of Gold, Kundan, or Polki.

Feel nothing less than a queen with the Punjabi Rani Haar. A certified traditional Punjabi jewellery, the Rani Haar is mostly paired with Choker Necklaces. It has a U-shaped design and falls up to the belly of the woman. This long necklace reeks of loyalty. It is evergreen and impactful due to its elongated size. Adorned with precious and semi-precious stones on a Gold or Diamond base, the Rani Haar is quite a trademark in Punjabi jewellery. 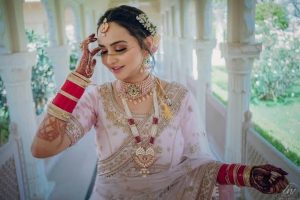 The Punjabi Payal has inscribed with meenakari or Kundan embellishments. The Pajeb often has a ghungroo attached to it which makes a tinkling noise at every step. Hence, if not seen, this Punjabi jewellery design can be heard by all. Worn at the feet, it looks best when worn with ankle-length or shorter-length outfits. 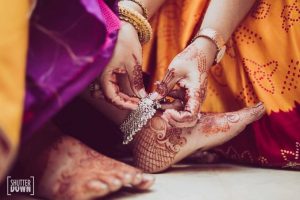 Originated in the Mughal era, the jhumki are occasional wear earrings. It is a top-rated choice by women from different cultures and transforms the look from casual to regal. The Jhumki, also known as jhumka, are umbrellas or inverted bell-shaped earrings that are available in several designs. These are made of gold or Kundan and bring focus to the ears and face in the most exquisite manner. With the addition of precious and semi-precious stones, these Jhumkis become a force to be reckoned with in the Punjabi jewellery sphere of influence. 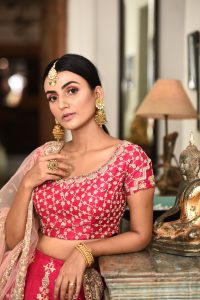 Q. Why do Punjabis wear a bangle?

A. Both girls and boys in the Punjabi culture wear Kadas or bangles. In fact, people from other religions, whether it be Hinduism or Christianity are often seen to be wearing these Kadas as a fashion statement. For the Sikhs, it is symbolic of them being servants to the Divine God. They also consider this bangle as a symbol of concealment or courtesy. Some even consider it as a wearable for protection against bad omens, a fighter against any upcoming danger.

Q. Which jewellery is famous in Punjab?

A. The most famous jewellery in Punjab is the different types of bangles. They may be the bridal Chur, the Kalire, or the renowned Sikh Kadas.

Q. What is the Sikh bracelet called?

A. Kara or Kada is the popular Sikh bracelets.

A. Yes, Punjabis do wear gold. In fact, gold is one of the most popular metals used in Punjabi weddings.

A. Yes, the Sikhs do wear wedding rings. The brides receive a ring for their engagement as well as the wedding. On the other hand, the groom gets only one ring during the wedding ceremonies.

Irrespective of the wedding occasions, Sikhs are permitted to wear rings.

Still have some doubts or unsure of how to get this kind of jewellery. Contact Us at Mahabir Danwar and avail help which caters to help you in every way possible. Punjabi jewellery is the prestige of the region, worn with dignity by men and women. Hence, getting such jewellery is sure to remain on-trend and act as a sustainable asset for years to come.

By Vedika Didwania / No Comments