The Indian subcontinent is recognized throughout the globe for its beautiful jewel creations. Many from all around the world admire Indian art due to its exquisite culture and tradition. Especially, in North India, gemstone study is created in several states and differs greatly into the next one.

Northern pieces of jewellery are well-known across the country and are worn throughout all special seasons. 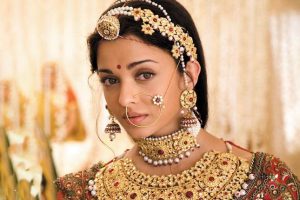 The majority of the ornaments were influenced by an imperial accessories adorned by the Monarch families of this section of India when they governed. The people of these regions want to enjoy life to the fullest, which includes their ornaments.  Northern India is known for its hefty jewellery making.

Bridal Jewellery front the North becomes especially important when considering the importance of Indian weddings. Wedding ceremonies in India are the most elaborate, with the Husband and Wife receiving the greatest attention from the start of the well before rituals to the close of the rituals. The sacred rites of a marriage, such as Henna, Darshan, Phera, and the much-anticipated Reception event, lie within this vast list of events.

Different areas of the country are known for distinctive accessories. For instance, the raging temple jewellery of South India. Few popular jewellery ornaments that are found in North India are:

Maang tikkas are available in a number of shapes and designs; select one depending on individual forehead form and desired aesthetic. If you’ve had a wide brow, a larger tikka might look stunning. If the head is shorter than average, a smaller maang tikka will look nice.

Maang tikkas are usually made to coordinate with the remainder of bridal jewels. For almost any bridal, a Maang Tikka decorating the girl’s forehead is essential. Maang tikkas, which are worn at the hair parting, exude an otherworldly grace that takes you to another age. The Maang Tikka is enhanced by the Matha Patti, which has embellished chains on both sides.

This is indeed an accessory that is used in practically every section of Northern India. It is used to embellish the top of the head and gives the wearer a magnificent appearance. When relative to the Southern parts of India, the tradition of donning a maang tika seems to be more significant in the North. The style of a Maang-Tikka might be substantial, inculcated with inlaid gems, or thin and elegant. Maang tikas are usually worn and adorned along a girl’s hair divider.

There are many different designs, sizes, and lengths to pick from. So, based on your demands, you may select little golden Jhumkas and heavy gold earrings of the same type. Diamonds can sometimes be embedded on these Jhumkas, which can be curated of the same texture. These Jhumkas go with every attire and may be paired with other accessories like the necklace, bracelet or nose pin. All of this will give you a stunning look that you’ve never had before.

Like most Northern Indian marriages, we can see a majority of women wearing various Jhumkas, which added to their attractiveness. Jhumkas are really a timeless delight among people of all generations.

These earrings have come a long way in terms of design since their inception. Ladies adore having many sets of Jhumkas to wear on a regular schedule. Relative to the rest of the country, the Jhumka tradition is much more prevalent in the North.  Uttar Pradesh, and Gujarat, are among the many states, that have the finest Jhumkas. 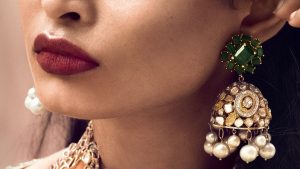 Bangles, as much as any other bracelet, get a distinct sparkle. Bangles are indeed an essential piece of Northern jewellery, and no ensemble is completely lacking them. Bangle Patterns are used by females all across the Indian country to adorn their hands in various ways. Their impending power has stretched to Bangladesh, Nepal, and Pakistan, which are all neighbours.

Women wear it on their wrists as a wider variety of slim Chood bracelets. It complements the Chood’s appearance, thus it’s frequently witnessed to be paired with them. Owing to these Kangan’s variety in designs, hues, and quality, it may even be used to be worn alone. This Kangan, which is available in Diamond, Gold, Polki and Kundan, among other precious metals, is an important aspect of India’s Traditional jewellery culture.

A set of Kangans’ fine jewelry differs from one region to the next. Kangans are purchased by those who frequently have been to the North in order to maintain their jewel collection constantly updated. 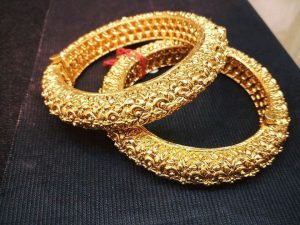 Reeking of royalty, the Raani Haar necklace is unlike any other. The design and texture of this specific ornament are unrivalled in terms of influence and beauty. There are endless ways to construct a necklace, and when it’s worn with any outfit, it’s sure to make an impression.

The Indianized analogues of the pieces of jewelry are the most appropriate bridal adornment and are used frequently in wedding rituals. Combining a Rani Haar with a simple gold choker neckpiece elevates the appearance to new heights. Sacred ornaments made of gold and designed in a distinctive way are also highly appealing.

Longer necks wear is generally paired with another neckpiece to make a bigger statement. These are in high demand and can be single-stringed or multi-stringed.

As the name implies, this magnificent pick was inspired by Indian princesses. With its aggressiveness, it enumerates the nobility of your apparel. Rubies, pearls, diamonds, and emeralds are commonly used in Raani Haar.

Contact our experts at Mahabir Danwar to avail an exquisite collection of the Raani Haar.

Any Ceremony features stunning jewels and bridal gowns of exceptional quality.  The classic Haath Phool jewellery is now a great fad in marriage style for the modern generation bride, who believes that charm is in the intricacies. A Haath Phool is an ancient wedding decoration for the Hindu bride that basically means the “hand flower.”

We sometimes ignore the extremely exquisite Haath Phools, that was a defined bridal appearance, among the Indian bridal accessory sets wholesale or offered nowadays. It’s a lovely ornament when worn at the rear of your hand, strung up about one finger. The Hath Phool’s intricate embellishments are enthralling when complemented by a band and a jewellery set.

Tied delicately around the waist, the Kamarbandh are ancient North Indian jewellery spread throughout the country due to their elegant appearance. They are used as fashion statements for the waist. The Kamarbandh keeps the saree or ghagra tied and accentuates a woman’s waist. They are made in gold, diamond and Polki forms.

The Kamarbandh can also complement quite well with a plain ethnic Kurti, bringing up the value of the attire. Brides of today are often seen including a Kamarbandh in their bridal jewellery set which is paired up perfectly with a necklace, earring and more. The many varieties of a Kamarbandh are well-known. They are available in a thin and light shape with a variety of jewelled embellishments to encircle your waistline and improve your appearance. 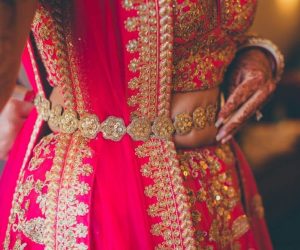 The vogue of North Indian jewellery has spread not only in India but worldwide. Indian fashion accessories are popularly known by these jewels and are even considered relevant by Western designers. Developed during the ancient Rajput and Mughal eras, it has crossed centuries to reform and still stays rooted in the past in its glory.

Q. Where to get the best North Indian jewellery bridal Jewellery sets?

Q. What are the several North Indian Jewellery Names?

The Biggest Fine Jewelry Trends of 2021

By Vedika Didwania / No Comments

Marry Royally: All you Need is a Beautiful Bridal Jewellery Set!