Maharashtrian jewellery has its singularly identified distinct appeal. It always has people captivated, from its interesting designs and motifs to its small subtleties.

Maharashtra, often known as the Land of Warriors, is a multi-cultural society and race. Maharashtra’s ancient jewels are influenced by the famous fighters and monarchs that formerly ruled the state.

Maharashtra is popularly known for the exquisite labour which went into almost every form of antique Indian jewellery.

It is endowed with such wealth in traditional jewellery types that are well-known not only between Marathis and also around the world.

A Maharashtrian wife differs significantly from brides from some of the other regions. Unlike brides from other Indian groups, who wear red, a Marathi girl wears a Paithani sari in traditional golden yellow, leaf emerald, or purple.

However, as you understand well classic Maharashtrian jewellery titles, you will form a relationship with them for the joy, history, and joy they provide to a Marathi woman.

Mumbai being the state capital is a hub for diversity, whether it be its vivacious Bollywood world, the exquisite street food or the thriving fashion world. Maharashtrian Jewellery is just the perfect cherry on top of these.

Here are some different types of Jewellery found in Maharashtra that would look ideal and would stand out on every occasion:

A traditional Maharashtrian Nath is a nose decoration donned by ladies for important celebrations such as marriage ceremonies or poojas. It’s made of pearls and has a pink or white stone in the centre. Nath is a piece of nose jewelry that is unlike any other nose pin in terms of style, and it fulfils Maharashtrian women’s versatile appearances. The Brahmani Nath, which is adorned with Basra pearl and emerald, is among the most renowned naths in the country today. The Marathi nose pin has a range of variations available today, including an all-diamond Nath.  The popular naths are called Banu Nath, Peshwai Nath, Pachu Nath, and so on. 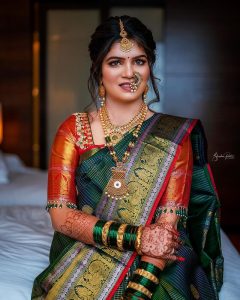 Mohan mala is a multi-layered gold studded neckwear with numerous layers of golden bead threads. The number of layers might range from 2 to 8, depending on the situation.

Around the areas of the southern and western portions of India, Mohan Mala is amongst one of the most complex and fabulously wealthy necklaces. This jewellery from Maharashtra is a mainstay and has a truly conventional and cultural appearance to it, making it appear unique and pure.

The mala is constructed up of gold beads with a necklace in the centre, most likely in a circular going shape. The stacking of gold stones, as well as the length of the jewelry, varies depending on individual preference and cost. Placed particular emphasis on cutwork designs that decorate Mohan Malas, and ladies love to show off their lovely Mohan Malas at big events.

Kolhapuri Saaj is indeed a Marathi girl’s favourite and is as unique as Mangalsutra. It’s created using jav mani or golden beads and a pendant in the shape of 21 leaves. Each pendant has its distinct significance.

Creating Kolhapuri Saaj consumes tonnes of extra effort and talent, as well as a light touch. Another unfortunate part is that just a few Craftsmen remain who can meticulously make a genuine Kolhapuri Saaj. 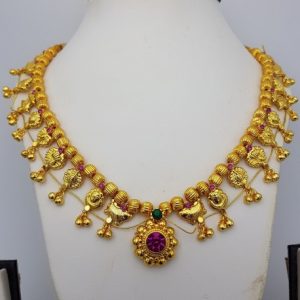 A very interesting item in the Maharashtrian jewels collection is Chattai Vaki. It’s an arm piece of jewellery, or Baajuband, made of 23-karat gold wire and studded with gemstones.

Excluding the reddish flower-related motif inside the middle, the gold band will not go well with soldering. Whereas the ruby represents the sun, Hindu women consider the colour red and its counterparts to be fortunate.

Armbands are popular wear for brides all over the country. They wear gold and diamond jewellery armbands in the South as well as the North which is completely inspired by their distinctive cultures. 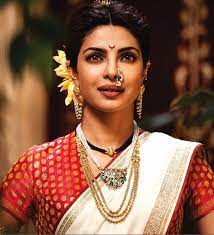 Another popular Maharashtrian jewellery is the Putli Haar. A Putli Haar is a necklace made out of a few spherical gold coins tied in by a silken woven string and worn by Maharashtrian women. It is additionally called a temple chain or a coin necklace.

Putli Haar is made up of a few spherical gold coins strung together along the same silk woven Patwa rope. Its Maharashtrian jewel titles include coin necklaces and temple jewelry. The deity of riches, Lakshmi, is shown on this Marathi accessory. Ever since the seventeenth century, Putli Haar has become an important feature of Maharashtrian bridal wear.

Among the most antique Maharashtrian jewellery, stands to be Thushi – a 22-carat gold choker style necklace. Our experts at Mahabir Danwar are well versed with Thushi necklaces, so you can contact them with ease in case of any queries.

Kolhapur is the birthplace of Hushi, a type of wedding jewellery. It’s made of gold pearls and has an extendable Dori. It’s Jowar golden kernels in it imply that sustenance would always be abundant in the girl’s new house. The matching of this Classic Maharashtrian item title with the term ‘Khushi’ is the easiest way of remembering this piece of jewellery.

Thushi is choker-style neckwear that is intricately weaved with gold stones. It has a movable Dori such that you could adapt it to your collar size. When worn with such a Paithani sari, it looks stunning. 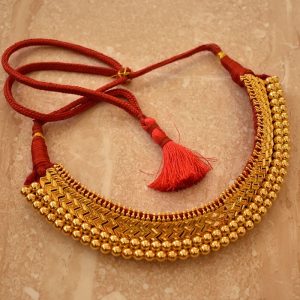 The feet also have their ornaments that are eye-catching whenever worn when it comes to the arena of jewellery from Maharasthra. Jodvi is one such exceptionally attractive example. The mother of the girl getting married presents her with a Jodvi, or silver toe band, which represents her admission into a new home. Every Marathi marriage must have it.

Bugadi is an earring that is placed just on the helix section of the girl’s ear. This is a  lovely earring and is mostly used by Maharashtrian and Northern ladies. The traditional Maharashtrian Bugadi is made of pearls, although there are now so many exotic diamonds or oxidized Bugadi accessible in stunning patterns.

Bugadi jewellery is also available in an all-diamond version in the present day and age.

These are usually long necklaces styled with another neck-hugging piece to have a larger impact. They may be single-stringed or more and are in demand. This majestic choice is inspired by the queens of India as its name suggests. It enumerates the royalty of your attire with its marked boldness. Raani Haar tends to be made of rubies, pearls, diamonds and emeralds.

A long gold necklace featuring 3 levels of pearl thread and a pendant in the center is known as Rani haar. When paired with a paithani jewel, it creates a stunning effect. 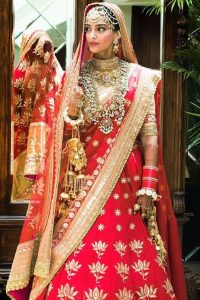 A Tanmani is a stacked pearl choker jewelry with a stone-studded centrepiece and pearl threads. Such as the Navratna, generally comes in a variety of hues or perhaps a blend. It features an adjustable Dori at the rear so you can use it at any proper size.

Tanmani is among the several exquisite necklaces that are part of the specifics when it comes to Maharashtrian jewellery.

Women usually wear their bangles in pairs. Bangles are a must-have accessory for married Indian ladies. Bangles in India are called by a variety of names and come in a variety of designs, depending on the state.

Bangles are known as Churi in Bengali, Kharu in Assamese, Valaiyal in Tamil, Bangadi on Tode in Marathi, and Chudi in Hindi, among other languages.

Tode is wide wrist cuffs that are interwoven without fusing and are among the biggest bracelets on a Maharashtrian woman’s wrists. These are often placed at the beginning or middle of a bride’s typical green Chuda. 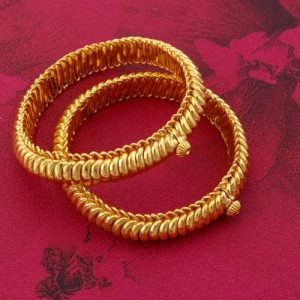 These were a few prominent pieces of jewellery from Maharashtra that have been there since time immemorial. These styles have shifted and spread all over the country, also inspiring international fashion at a few junctions. Brides adorn them with pride on their special day and having a collection of these will never disappoint!

Q. What is Maharashtrian jewellery called?

A.There is no specific distinct term for such jewellery, though a few of the accessories that are part of Maharashtrian jewellery can be called a piece of Peshwai jewellery or Marathi jewellery.

A. Buying expensive things such as jewellery online can be tricky, so our team at Mahabir Danwar has set up a free Video Consultation to help you choose ornaments online. Also, you can Virtually Try Out several designs on our website, and have a complete digital experience.

Q. What is included in a traditional Maharashtrian jewellery set?

A. A usual set may include the necklace and earrings as stable jewellery items. However, it can always be customized to include naths, armbands, anklets and many more accessories as the need arises.