In a country like India, which is home to ethnic variations, there are several types of accessories that are assigned to a certain linguistic or regional groups. While looking for the perfect piece, people often ask us to suggest options from the “South Indian” or the “Punjabi” collection.

Apart from this segregation, pieces of jewellery also differ across borders of countries. People of the West have a completely different assortment from that of the East. Hence, recognising this cultural diversity when it comes to accessorising oneself with precious jewels is of utmost importance.

In Indian weddings, jewellery is considered to be a symbol of wealth and auspiciousness. It enhances one’s beauty and is an expression of self.

How different parts of India celebrate this expression:

The home of the royal Rajputs, Rajasthan, resonates royalty in every form. It does not only have some of the most remarkable monuments but also has premium styles in accessories. Their design involves a combination of antique and contemporary styles. Bollywood movies like Padmavat and Jodha Akbar masterfully display Rajasthani-style jewellery.

Kundan, Polki, Thewa and Meenakari forms of jewellery all originated in the state of Rajasthan. Raani Haar, which is a piece of popular bridal jewelry at present, is also a production of Rajasthan which earlier queens used. Jhumka and bajuband are some other Rajasthani style jewellery.

Due to this wide ranging selection, jewellery from Rajasthan are popular and mostly in trend. They are regal choices in the market today. It is mostly worn by the Marwari, Gujarati and Banjara people of India. Borli jewellery is customary in these sections. Mahabir Danwar’s productions of this form has received a hearty response from the crowd throughout, which makes it a risk-free and beautiful option for all jewellery seekers. 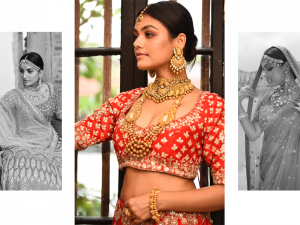 The next in line is the Punjabi or Sikh style Jewellery. Haven’t we all witnessed Sikh brides wearing heavy sets of red bangles several days after their wedding? Those are called chooda and are a set of 21 bangles given by the bride’s maternal side. After dipping the bangles in milk and rose petals during an auspicious ceremony, the bride is allowed to wear it along with the kalire. An umbrella shaped hanging tied to the choodha.

Nath (nose rings), Kamar bandh, Payal, toe rings, necklace and Jhumka are some other basic Punjabi pieces of jewellery. These may be made of a variety of precious metals like Gold or Diamond. Areas of Punjab, Haryana and Delhi, have the most buyers of this type of jewelry.

However, due to their extravagance and stunning form, this culture has started spreading to different parts of the country with women of many regions practising their hand at a Sikh jewel. 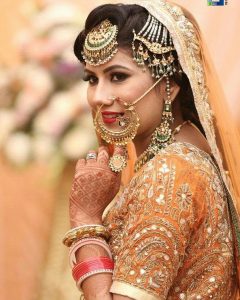 Moving on to the apex of the Indian subcontinent, let’s have a look at the various types of South-Indian jewellery. Temple jewellery, which is a signature of southern origin, has now spread to the Northern, Eastern, and Western parts of the country, and is actively worn by modern women experimenting with cross-cultural styles. This helps add distinctiveness to their look and instills a sense of uniqueness.

Temple style includes necklaces, earrings, kamarbands, maang-tikas and similar, and are inscribed with motifs or figures of divine figures on gold and diamond.

Worn with splendid Kanjeevaram sarees, another famous jewellery in the South are the diamond accessories combined with pearls and rubies that are worn as chokers and hairpins by women. 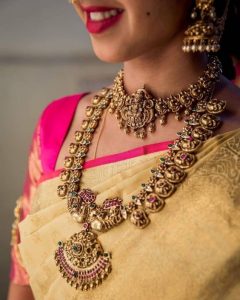 In West Bengal, jewellery is a symbol of pride for women. It adds sophistication and class to the look and even the simplest choices leave a lasting impact. Gold is a popular choice among Bengali women, symbolizing class. Kaan Bala is found here, which are earrings in the shape of the ear and are mostly made of gold. Along with this, the Chik necklace is an extremely renowned piece of jewellery in Bengali culture. It is a form of choker necklace that can not be set beyond the collar bone. It is not only worn by brides during their wedding ceremonies but also by women during important occasions, like the celebrated Durga Puja.

Using about 50 grams of gold, the Gold Chur is one of the heavy pairs of jewels, adorned by the Bengalis. Both married and unmarried women wear it and it is secured by parents for their children. It is believed that the larger the nath of a Bengali bride, the higher is the status of the family.

The jewels of West Bengal have made a world of themselves by the use of distinctive names for their assortment, For eg., their Gold bauti is a half-cut bangle, Bokul Mala is a gold necklace and tikli is a maang-tika. All of these are simultaneously worn and are well known among the Bengali crowd. Handcrafting these is something that we, at Mahabir Danwar, derive a lot of enjoyment from. 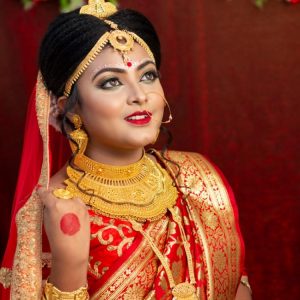 Bengali Jewellery is worn by the bride

Towards the eastern part of India, we can find Bihar, a state which is home to tradition and culture. Their jewellery selection is exotic, colourful and consist of subtle designs. Naths are an important selection for the women of Bihar.

They are moon-shaped in style and cover half of the lower part of the nose ring. Chandbalis made of diamonds are also appreciated here. Alongside, choker necklaces and tikli, similar to that of Bengal, are part of the Bihari culture. 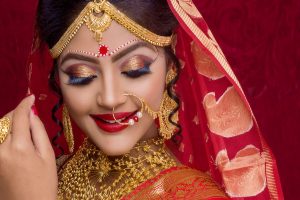 Entering the arena of the extreme Northern part of India, towards the hill stations, Jammu and Kashmir behold a unique and remarkable jewellery culture, unlike any. If their lush valleys and snow-capped mountains weren’t enough, their accessories too have a beauty of their own.

Kashmiri earrings that are called Deji Hoor, are ear accessories that hang by silk or gold chain. It is a symbol of status for Kashmiri women. Atta-Hor too is made of gold and is a chain running along with the head of Kashmiri pandits. Much like any other culture, they too have choker necklaces called Halaqband.

A few of the very singular jewels in Kashmir, are the Sondus which is like an armband for the left shoulder and is adorned with precious metals. Inspired by these mountainous styles, several pieces of jewellery are made all over the country based on their regional mountainous designs.

Lastly, another significant linguistic and regional diversity when considering these accessories, are the Gujarati styles of jewellery. Covering a large part of the Western Indian structure of jewels, the Gujaratis are lovers of a variety of precious and semi-precious metal.
The Kundan Rani Haar is a bride’s ornament in the state. Moreover, damini, an exquisite forehead adornment is something worn by Gujarati women. The loops of the Damini accessory are stuck to the sides and the middle.

Kundan Butti is another very interesting presence in Gujarat. Going over the head, it hangs by the ear as an earring. Much like kamarbands, the Kandora accentuates the waist area of ladies. Further, the Ancia Chandan Haar is four parts of gold hung together and has quite a resemblance with Rani Haar.

The Kundan Bangdi bangles are just another example of different names given to bangles across India. Made of Kundan, these bangles are worn by Gujarati people and it really enhances their look, making it more wonderful. 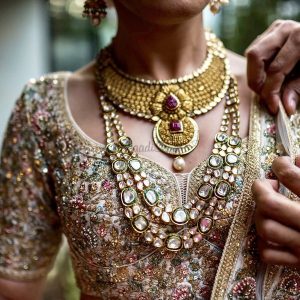 What is the spiritual importance/association of Jewellery across India?

It is quite interesting to note that along with the cultural and linguistic diversity in India when it comes to food, festivals, and behavior, even their jewelleries have their own singular identity. Every region has given its own name to its accessories, with only a limited scope of uniformity among all.

With Mahabir Danwar supplying handcrafted jewellery throughout India and being an active participant in the B2B business industry, we have become acquainted with the regional differences in jewellery and can, therefore, suggest the best options to you, as per your preference. Get In Touch With Us for further assistance and know more.

Keeping The Pandemic &  Covid 19 situation in mind, we also offer assistance over a Video call, which can help you choose your preferred Jewellery. To schedule an appointment for the video call you can register by going to offers.mahabirdanwarjewellers.com

Why is Jewellery a Good Investment?

Marry Royally: All you Need is a Beautiful Bridal Jewellery Set!