India has diverse cultures, traditions, linguists and fashion trends. Indian jewellery is also part of this versatility with its changing styles and usage as one moves from north to south or east to west.

Region-wise understanding of Indian jewellery will clarify and get you familiar with India’s unique authenticity.

Differences in Indian Jewellery Designs from Different states of the country.

Maharashtrian jewellery has a special appeal that may be distinguished. From its intriguing shapes and patterns to its little details, it never fails to enchant.

Maharashtra is a multi-cultural and multi-racial society. It is also known as the Land of Warriors. The renowned soldiers and monarchs who once governed Maharashtra have left their mark on the state’s ancient jewels.

Maharashtra is well-known for the meticulous craftsmanship that went into practically every type of vintage Indian jewellery.

It has a plethora of traditional jewellery varieties which are well not only among Marathis but also throughout the world.

A Maharashtrian bride is quite different from brides from other parts of the country. A Marathi girl wears a Paithani sari in typical golden colour, unlike brides from other Indian communities who wear crimson.

However, after you have a good understanding of traditional Maharashtrian jewellery titles, you will develop a bond with them because of the joy, heritage, and excitement they provide to a Marathi woman.

Mumbai, as the state capital, is a melting pot of cultures, whether it’s through its vibrant Bollywood scene, delectable street food, or bustling fashion scene. Maharashtrian jewellery is the perfect complement to these pieces. 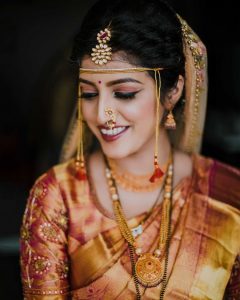 A Maharashtrian Nath is a traditional nose decoration donned by ladies for important celebrations such as marriage ceremonies or poojas. Kolhapuri Saaj is a neckpiece that is a Marathi girl’s favourite and is as unique as Mangalsutra. Vaaki, Raani Haar, Bugadi, Jodvi, Mohan Mala, Tode and Tanmani are some other pieces of jewellery worn by Maharashtrian women.

In every way, the diversity of Indian culture is unrivalled. Regardless of whether it is in the north or south, each territory has its unique jewellery culture, similar to the well-known traditional Punjabi jewellery.  When it comes to Punjabis, the regional differences in Indian jewellery design

is known for their elaborate jewellery and accessory arrangements, which are not only stunning but also have a long history. Punjabi brides have combined current fashions with their centuries-old historical attire to create the ideal blend of class and elegance.

Various types of traditional Punjabi jewellery are worn in this region and have spread their impact across the rest of India. The following are some popular Sikh accessories:

The Chura is unsurpassed as the first and most prominent reference of Punjabi jewellery. Punjabi brides are known for wearing the chura for the last several days after their marriage. This chura is a pair with 21 bangles that are usually crimson, maroon, or perhaps even white ivory in colour. These bangles are given as pre-bridal traditional wear by the couple’s uncles and signify the rank of a new wife. Guests assemble to watch the auspicious Chura ceremony, which symbolizes the significance of this item to Punjabis.

The Kalire is a type of Punjabi jewellery that is designed like an umbrella. They represent joy and everlasting love for the wedded pair. The pair will never go hungry and has always had protection, as the Kalira’s umbrella shape symbolizes. The girl’s sisters and relatives are accountable for attaching this Kalira to the bride’s Chura. 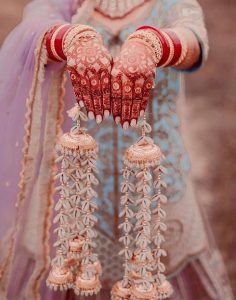 Usually worn, nose jewellery is one of several traditional Punjabi Jewellery styles that is rich and gorgeous. The Shikpuri Nath is a simple nose ring that features a gemstone in the centre. The nose ring is linked to a gold or metal ribbon that runs behind the ears and into the hair. Typically, it is fashioned of gold or Kundan.

Payal and Jumka earrings are some other popular Punjabi jewellery designs.

There is a historic culture of Bengali Jewellery in the eastern portion of India, in the province of West Bengal, that has been regularly modified over the years according to trends. It is a symbol of a great addition to the age-old Bengali community, which is the majority in West Bengal.

Women and men are required to dress in Indian attire for ethnic and religious ceremonies throughout the country, and to wear jewellery to complete the look. Jewellery is a terrific stylistic option that has been utilized for ages and helps to realize a person’s rank and distinction.

West Bengal has long been known for its rich culture, which includes art, literature, lifestyle, profession, and apparel. Weddings are one of the most significant events in a person’s life. On this important day, Bengali women wear traditional Bengali bridal jewellery, which gives a touch of elegance and sophistication to the outfit.

Some prominent Bengali jewellery types are:

Yes indeed! The Bengalis not only have a tiara but also a Mukut or crown jewellery. It appears as a crown that is placed on the bride’s head and is worn by traditional West Bengal women.

Another unique piece from the Bengali jewellery collection, the khopa accessory is used for styling the hair. It is constructed in gold, forming a net-like structure. The Khopa is spread along the woman’s bun to keep it in pace and brings focus to their hair with its stunning design. It was mostly used during the earlier decades and has faded in its influence at present. 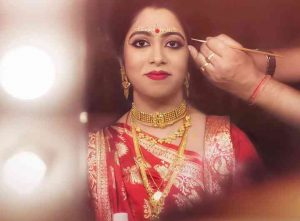 The Bengalis, as with most ethnicities, have their variation of the choker necklace. In Bengal, Chik is a choker-like style that envelops the neck and extends for around 1-1.5 inches. Unlike other pieces of jewellery, the Chik necklace is available in a variety of metals, including gold, diamonds, and pearls. It is used for a variety of situations due to its elegant and contemporary design. It is, nevertheless, most important as a piece of Bengali bridal jewellery to be worn at weddings.

Kaan Baala is earrings that are carefully made to match the form of the ear. The Kaan Baala earring, which may weigh up to 15gm and more and are a sign of social regalness due to their pricey craftsmanship, is a symbol of social regalness. Bengali brides frequently wear them, which are frequently attached to a pendant structure at the end.

Nolok, Ratanchur, Mantasha, Bauti and Kankan are some other Bengali jewellery that is appreciated by many in the East. To know more about this jewellery, Contact Us at Mahabir Danwar.

The South, more than any other region in India, is known for its cultural treasures. When it comes to women’s cosmetics, South Indian jewellery has created its realm. The regalness or monarchy that these artifacts exude is unparalleled. Furthermore, they are versatile and may be worn with a variety of ethnic clothing.

Temple Style Jewellery is considered a must-have accessory for South Indian weddings, and it is progressively gaining favour across the country. They come in a range of shapes and sizes, with motifs of Gods, Goddesses, and holy symbols like a lotus or an animal image. It is made of gold and is encrusted with semi-precious and valuable stones such as pearls and rubies.

Some of the most popular South Indian jewellery sets are inspired by temple styles. These styles are available as necklaces, kamarbands, mathapathi, bangles, Kadas, and earrings. 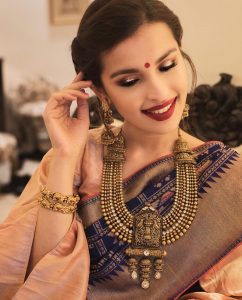 The Kamarband is another type of jewellery that is utilized more extravagantly in the South than in other parts of the country. It is worn lightly around the waist as a sari holder, a religious symbol, or simply for aesthetic reasons.

South Indian women have a particular fondness for kamarbands and wear them with grace whenever they are worn. Regardless of the modernization of its styles, the majority of South Indian wedding jewellery sets consist of kamarbands. The most basic is a temple-styled gold Kamarband, which is worn not only by brides but also by anyone wearing modest ethnic attire.

With its majestic beauty, enchanted calm, and rich traditional culture, Jammu & Kashmir has a rich cultural heritage of fine artistry among its people, resulting in products, particularly traditional jewellery, that are well-known internationally. The regional differences in Indian Jewellery design in Jammu and Kasmir are especially different.

Kundalas are round earrings worn by the rural inhabitants of Jammu and Kashmir.

Nupura In Jammu, these are the anklets worn by rural ladies.

Bala is adorned with a turquoise gem that hangs from a border of gold petals and spheres.

Deji-hor is classic Kashmiri earrings that hang from a silk thread or gold chain and enter via holes bored at the upper end of the ears.

Deji-hor is amongst the most well-known and often worn Kashmiri bridal jewellery types, represents Kashmiri women’s married status and is predominantly worn by Kashmiri Pandit women. 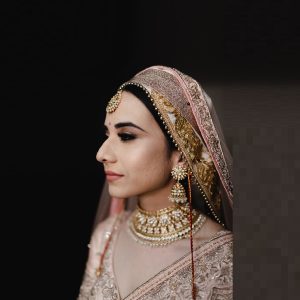 Hence, these are the various broad regional differences in Indian Jewellery design found across the country. To know more about this diversity and consult experts in the field you can Contact Us at Mahabir Danwar.