India is home to several languages, religions, and different types of Jewellery that vary from North to South and East to West. Towards the eastern part of India, in the region of West Bengal, exists an antique culture of Bengali Jewellery, that has been regularly reformed over the years as per the trends. It is a symbol of a glorious addition in the age-old community of Bengalis, who are most dominant in West Bengal.

Ethnic and religious functions of the country require women and men to dress up in Indian wear and wear jewellery to further enhance this look. Jewellery helps realize the status and prestige of a person and is a great styling option that has been used for several centuries.

West Bengal, as a state has always prided themselves for their sophisticated culture, in terms of art, literature, lifestyle, profession, and attire. Weddings are one of the most important occasions in one’s life. Bengali women on this special day adorn themselves with traditional Bengali bridal jewellery that adds paramount able grace and sophistication to the look.

Gold Jewellery especially, is most predominantly used in the Bengali traditions. There are several types of gold Bengali Jewellery that are used:

Tikli is usually pendant-shaped head accessories, placed in the mid-parting section of the hair. It tends to be made out of gold with intricate patterns inscribed onto the surface. These tiklis are used not only by brides but also by women generally, when attending auspicious functions or other ethnic occasions.

Maang tika, on the other hand, comes in varying shapes and forms like a crescent or round form. They too are made of gold with pearls or semi-precious stones attached to them.

In reference to the most authentic Bengali Jewellery designs, the tiara is bound to be the foremost on the list. It is usually attached with the tikli by a gold string that spreads horizontally over the woman’s head. Inspired by the British tiaras, this accessory is used to keep the veil of a Bengali bride in place.

Yes indeed! The Bengalis not only have a tiara but also a Mukut or crown jewelry. It literally appears as a crown that is placed on the bride’s head and is worn by traditional West Bengal women. 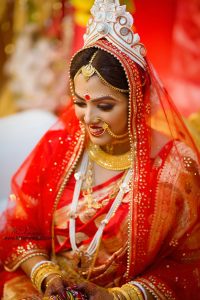 Another unique piece from the Bengali jewellery collection, the khopa accessory is used for styling the hair. It is constructed in gold, forming a net-like structure. The Khopa is spread along the woman’s bun to keep it in pace and brings focus on their hair with its stunning design. It was mostly used during the earlier decades and has faded in its influence at present.

Much like most cultures, the Bengalis too have their own version of a choker necklace. This choker-type form extending for about 1-1.5 inch, that envelops the neck is known as Chik in Bengal. Unlike other jewellery, the Chik necklace is not only available in gold but also in diamond or pearl forms. Due to its stylish and contemporary design, it is worn for all kinds of occasions. Though, it is primarily vital as a piece of Bengali bridal jewelry to be worn in wedding events. 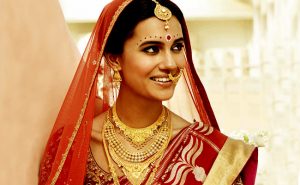 Worn by affluent Bengali women, the pati haar is a necklace. The design of this necklace is made flat and broad. Due to this, it is a comfortable ornament for most West Bengal ladies. Made of pure gold, the Pati Haar is most likely to be worn in the event of the auspicious Durga Puja and also during other ethnic functions.

When it comes to jewellery, it just can’t get more royal and prestigious than the Saath Noli Haar. Passed on through the lineage, it often appears to be a family heirloom. This Neckpiece is gifted by the mother-in-law or the mother. The Saath Noli Haar is described as a seven-layer necklace made of gold. This Saath is also found in groups of five, which is then known as Paanch Noli Haar.

The timeless feet accessory, beautifying and making the ankles look slender is the Nupur or Anklet/Payal. Traditional brides are often seen wearing an anklet on their feet, though this habit is witnessed to be slowly fading with the changing of times.

Known as Jhumka in the North, the Jhumko are chandelier-shaped earrings worn by the women of the East. They are covered in floral patterns and made of gold. The Jhumkos are responsible for complimenting a person’s attire with their bold and beautiful structure. 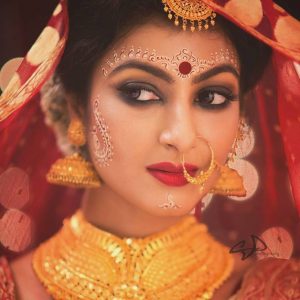 Kaan Baala is meticulously shaped earrings that are crafted along with the shape of the ear. A symbol of social regalness due to their expensive craftsmanship, the Kaan Baala earring may weigh as much as 15gm and more. These are extensively worn by Bengali brides and are often attached to a chandelier-like structure at its end.

This is a stud earring made of gold and is usually inspired by floral patterns. It is circle-shaped and enhances the ears with its versatile look. The Phooler top is a smaller version of the Kaan Pasha.

The Nolok or Nath is a very impressive Bengali accessory. It is worn on the nose by brides and women attending important ethnic functions. The Nolok is a large gold ring (it is believed that the larger this nose ring is, the richer the family of the woman is), attached to a string that goes behind the ears. 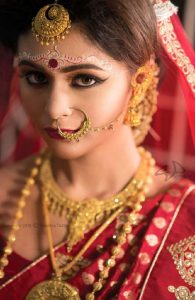 Passed on from the ancestry, Chur is a bangle-like accessory, mostly available in pairs. It is made of pure gold that may weigh as much as 50gms. The Chur is a flat-shaped bangle that is markedly broad in size. Hence, when worn it accentuates women’s wrists with its richness. 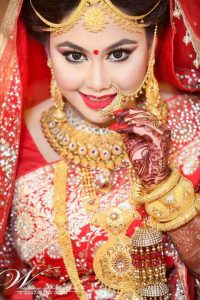 The Ratanchur, too, serves as a memoir of ancient times, mainly of the Mughals. About 5 finger rings are attached to a bangle on the wrist through a string that eventually forms a Ratanchur. Designs of the moon, lotus, and sun are commonly found when making this jewelry.

Popularly known as Kadas in other parts of the country, Baala is bangles worn in pairs. They are minimalistic in design and can be used in regular wear.

The Bengali jewellery mantasha is a mixture of gold and pearls. It can not be called a bangle because its structure is most similar to that of a bracelet. The mantasha is available in a variety of designs and is worn by Bengali women on their wrists.

The Beloari Churi is made with cut designs. They have a thin structure and are often replaced with bangles. They can be worn in several batches of 5-10 and even more to leave a more extraordinary impact on people.

The Noboratna Baala are bangles adorned with 9 precious or semi-precious gemstones. Navratna means Nine Gems. The stones on this gold bangle are of varying distinctive colors, making it look incredibly exquisite and vibrant when worn.

In the Bengali jewellery catalog, Shona Badhano Loha has secured an indispensable place. This is because of its connection to superstition and old beliefs. These bangles are iron-covered in gold and are most prominently worn by married Bengali women for the well-being of their husbands.

A gold bangle chur, the Kankan bangles tend to have spike-shaped formations surrounding the entire length of the accessory. Designs of mango, star and sun are seen to be made on the spikes. The vastness of these bangles brings them to notice with ease and leaves a hearty impact on people. They can be worn in weddings, auspicious occasions, and formal events as well.

Lastly, Bauti is another one of the Bengali jewellery designs for bangles. It is half-cut wrist wear instead of a full one. Due to this half-cut design, the quantity of gold used is much lesser than that of the other bracelets and bangles. Carving the adjoining part of the bauti jewelry with peacock design is very common in West Bengal. 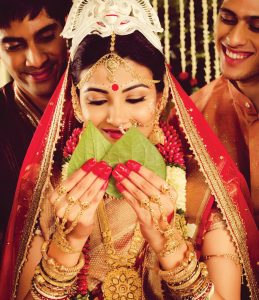 West Bengal is home to some prime jewellers who provide you with the best quality Bengali jewellery of varying designs. Looking for Bengali jewellery online? You can  Contact Us or Set Up A Video Call Session where you can avail yourself of personalized services provided by experts in the field.

We, at Mahabir Danwar, look forward to enriching your jewellery collection and providing you with a compiled set of accessories, suited for every need.

What is Maang Tikka called in Bengali?

Which state has the highest gold in India?

All About Kundan Jewellery – Origin, Making, Culture And Types

A Guide to Understanding if the Diamond is Real or Fake